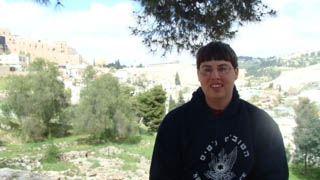 Andrew was born with L-TGA or congenitally corrected transposition. Basically his left and right ventricals are reversed. He was asymptomatic and was diagnosed at a well check up prior to entering kindergarten.

He had his first surgery at 6 to replace a very leaky tricuspid valve. He did well with it until he was 15 when he needed to have it replaced. He had some complications with an MI during surgery but recovered very well and was home in about 10 days.

His first day back to school he suffered cardiac arrest and spent another week in the hospital as it was determined that he needed a defibrillator and determined he did not also need bypass surgery. He received his first appropriate shock from the ICD in October of that same year.

Andrew continued to do well until his Junior year when he developed a very severe case of bacterial endocarditis which quickly shut his kidneys down and threatened to take his life. He required cpr twice while at a hospital over 600 miles from home.

He was life flighted back to children’s Memorial when he was stabilized enough for the trip and we waited for him to improve enough to have two of his valves replaced and the infected ICD to be removed.

Dr Mavroudis and Dr Backer replaced the valves and cleaned up his heart on May 21st, eighteen days after he was first flown to the hospital in Fargo, ND. Andrew came home July 16th. He had endured hemodialysis and a skin graft, a second heart sugery where a large hematoma was removed not to mention a placement of a pd cath and removal when he thankfully no longer needed dialysis.

The last surgery took place July 9th when a decision was finally made that he was well enough to replace his ICD as reinfection was always a concern.

He is doing well today. He went home barely able to walk to where he is today doing cardiac rehab three times a week. He had done several weeks of physical rehab previously.

He is now a highschool graduate and is attending college this year. He is one amazing kid with an amazing story and an amazing God who has been with us each step of the way with His amazing grace.

Andrew is in heart failure and is undergoing evaluation for possible listing for a heart transplant. He had a cath 7/16 which showed high pressures going into his lungs and has remained at Children’s to try to lower these pressures.

Andrew received a L-VAD a heart mate 2 on Dec 7th. It was a very sucessful surgery done by Dr Russell and assisted by Dr McGee. We are hoping this l-VAD will lower his pulmonary pressures enough for him to be able to be listed for a transplant.

Andrew has been listed for heart transplant since April 2011. He was listed 1a in Oct. And moved back to 1b after 30 days as the LVAD protocol is.

In Feb. 2012 Andrew’s ICD lead has shown signs that it maybe starting to have problems. It is being watched closely for continued signs that it may be beginning to fracture. A known issue with his particular lead. (Sprint Fidelis). April 2012 his Heart Mate II LVAD has been put on FDA’s class 1 recall list due to an issue that has become known. We are unsure of implications for Andrew at this point.